This is a major improvement over last week’s photos. Check it out after the jump.

Last week, the first images of Johnny Depp from Tim Burton’s ‘Dark Shadows’ leaked out. As you may recall, pretty much everyone thought they looked awful. We may have even referred to him as some sort of mime.

Now we are getting our first official look at the cast and it looks much better. Yes, Depp still looks pale, but he is playing the vampire Baranbus Collins after all. Also featured in the image are Michelle Pfeiffer, Helena Bonham Carter, Eva Green, Jackie Earle Haley, Jonny Lee Miller, Bella Heathcote, Chloe Moretz and Gulliver McGrath.

I’m not too familiar with the series, but My mom loved it when she was young. Personally, I’m thrilled to have the chance to see Depp, Jonny Lee Miller and Michelle Pfeiffer acting together. 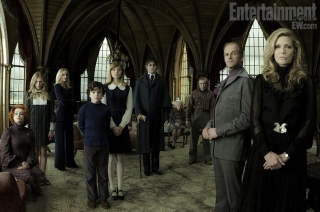 Here’s the official synopsis
In the year 1752, Joshua and Naomi Collins, with young son Barnabas, set sail from Liverpool, England to start a new life in America. But even an ocean was not enough to escape the mysterious curse that has plagued their family. Two decades pass and Barnabas (Johnny Depp) has the world at his feet—or at least the town of Collinsport, Maine. The master of Collinwood Manor, Barnabas is rich, powerful and an inveterate playboy…until he makes the grave mistake of breaking the heart of Angelique Brouchard (Eva Green). A witch, in every sense of the word, Angelique dooms him to a fate worse than death: turning him into a vampire, and then burying him alive.