Sony has released the official plot synopsis for Marc Webb’s “The Amazing Spider-Man.” 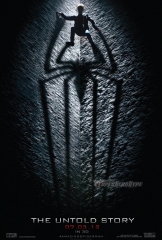 Sony Pictures has released the official plot synopsis for Marc Webb’s “The Amazing Spider-Man.” And while on the surface it’s similar to the classic origins tale, there’s been some subtle changes and a new mystery. From what I can tell based on the synopsis, the story is a mix between the original and Ultimate, with some Hollywood rewriting thrown in, namely — What happened to Peter’s parents?

Read the complete synopsis below:

The Amazing Spider-Man is the story of Peter Parker (Andrew Garfield), an outcast high schooler who was abandoned by his parents as a boy, leaving him to be raised by his Uncle Ben (Martin Sheen) and Aunt May (Sally Field). Like most teenagers, Peter is trying to figure out who he is and how he got to be the person he is today. Peter is also finding his way with his first high school crush, Gwen Stacy (Emma Stone), and together, they struggle with love, commitment, and secrets.

As Peter discovers a mysterious briefcase that belonged to his father, he begins a quest to understand his parents’ disappearance—leading him directly to Oscorp and the lab of Dr Curt Connors (Rhys Ifans), his father’s former partner. As Spider-Man is set on a collision course with Connors’ alter-ego, The Lizard, Peter will make life-altering choices tot use his powers and shape his destiny to become a hero.

So Peter’s superhero motivation involves his parents and their mysterious disappearance. It sounds like Connors only comes into play because of his connection to Pete’s past. We wonder when and how he’ll discover the doctor’s questionable experiments.

Peter will also have his fair share of teen drama. Since the film is a coming-of-age story, it will focus on him finding his identity. That will be hard task, considering that he has two of them. He’s a high school student by day, and a rogue superhero by night. It’s like Sophie’s Choice. How will he balance them both?