Here’s the official synopsis:
Frank (Rainn Wilson) is an average guy who transforms himself into superhero The Crimson Bolt after his wife Sarah (Liv Tyler) hooks up with a smooth-talking drug dealer, Jacques (Kevin Bacon). What Frank lacks in superpowers, he makes up for with a trusty wrench in his one-man war on crime. But every superhero needs a sidekick. Enter Libby (Ellen Page), a cute psychopath working at the local comic book store. Transforming into “Boltie”, Libby teams up with Frank to take Jacques down. From the surprising imagination of writer-director James Gunn (Slither) comes Bolt and Boltie, a crazed crime fighting duo for the XBox generation. They’re here to save the day, or at least to beat you up. 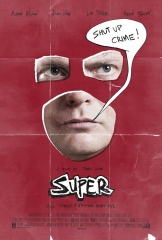