Official Teaser Trailer And Poster For ‘Despicable Me 2’

The Minions are back and feeling musical in the first official teaser for ‘Despicable Me 2’.

The Minions are back and feeling musical in the first official teaser for ‘Despicable Me 2’. We still have more than a year before the movie hits the big screen… in 3D, but it is never too early to start the wheels of promotion. The new film stars Steve Carell, Jason Segel, and Al Pacino and is set for a July 3, 2013 release. 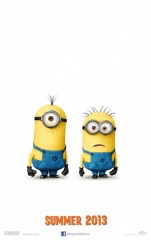 Official Synpsis:
Universal Pictures and Illumination Entertainment’s worldwide blockbuster, Despicable Me, delighted audiences around the globe in 2010, grossing more than $540 million and becoming the 10th-biggest animated motion picture in U.S. history. In Summer 2013, get ready for more minion madness in Despicable Me 2. Chris Meledandri and his acclaimed filmmaking team create an all-new comedy animated adventure featuring the return of Gru (Steve Carell), the girls, the unpredictably hilarious minions…and a host of new and outrageously funny characters.