‘Cloudy With A Chance Of Meatballs’ Receives Official Title!

Sony Pictures Animations has announced the title for the sequel to “Cloudy With A Chance of Meatballs.” 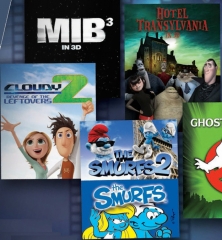 Comingsoon reports that Sony Pictures Animations’ sequel to “Cloudy With A Chance of Meatballs” will be released as “Cloudy 2: Revenge of the Leftovers.”

The new title was confirmed with the release of the image below, which teases at other titles for other upcoming animated films.

Directed by Cody Cameron and Kris Pearn, “Cloudy 2” does not currently have a release date. But voice talents Bill Hader, Anna Faris, James Caan, Bruce Campbell, Andy Samberg, and Mr. T. and most are expected to return.

Here is the book description:
In Pickles to Pittsburgh, we check back in with Kate and Henry as they eagerly await Grandpa’s return from an unusual vacation. Kate dreams about a postcard Grandpa has sent, and the story begins.

Kate and Henry pilot a plane, landing on a runway of crisp bacon strips next to a field of giant broccoli stalks and oversized hamburgers. Passing through an orange-juice rain, they approach the town of Chewandswallow, which “used to be a very ordinary town, except that instead of weather, food rained down from the sky for breakfast, lunch, and dinner.” Times have changed in Chewandswallow, and readers will love finding out how storms of gigantic food threatened normal life until eventually the Falling Food Company was created, sending food to hungry people around the world.