“Conversations are starting. It’s a long process with the studio and the producers and everything. But it’s definitely a project that I’m really interested in…” 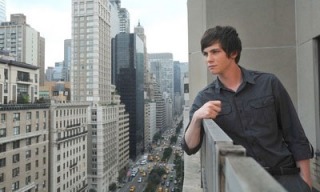 In an interview with Access Hollywood, Logan Lerman, the 18-year-old star of “Percy Jackson & The Olympians: The Lightning Thief,” says that he’s in early discussions to play Peter Parker in Sony’s Spider-Man reboot.

“It’s just, you know, conversations are starting. It’s a long process with the studio and the producers and everything. But it’s definitely a project that I’m really interested in, of course. I’d love to focus on the human element a little bit more. It’d be such a fun experience.”

Lerman who has been a rising star has appeared in several films (My One And Only, Gamer, 3:10 Yuma) is a great actor and no stranger to action scene as we’ve seen in “3:10” and will see in the upcoming “Percy Jackson.” Do I think he’s a great fit as Peter Parker? Not really. Lerman who I think looks a lot like Jacob Ellsbury from the Boston Red Sox has too much of an exotic look and comes off too cool to play a nerdy puny Parker. As much as I like Lerman, I’m still overprotective regarding who gets cast, especially someone who’ll be the next face of Spider-Man for the next decade.