Playmates has released some images and first look at their upcoming Shrek toy line which will hit retail shelves this May 1st.

Last month Playmates announced that they will be producing a new line of toys based on the upcoming Dreamworks “Shrek Forever After” movie. Playmates have since released some images and first look at their upcoming Shrek toy line:

In May 2010, Shrek will embark on an all new adventure in the highly anticipated fourth installment of the #1 animated franchise of all time, Shrek Forever After. For the first time ever, Playmates Toys delivers the full Shrek experience through a complete World of Shrek toy line that captures the humor and energy that makes the Shrek franchise so popular, complete with the whole world of Shrek: his friends and adversaries, his hilarious adventures and misadventures. Hitting retail shelves May 1st, the toy line will include multiple sets of Shrek mini figures, including the Shrek Ogre Attack Ball and the new ogre army; stylized and chunky swamp figures that come in ooze-filled containers. Dolls, & humor-filled talking plush will round out the line and deliver the experience of humor, fantasy and fun that is only Shrek. 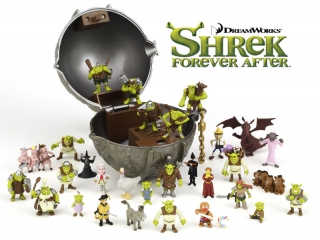 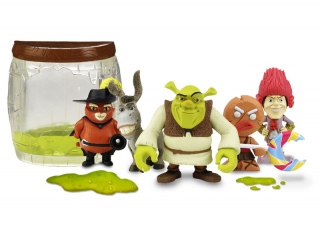