DO ANDROIDS DREAM OF ELECTRIC SHEEP? ships this June and will present the full text of the novel fully illustrated… 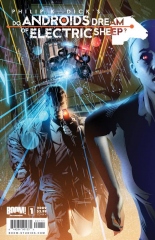 In a bold experiment of taking an entire novel and fully illustrating it, BOOM! Studios in partnership with Electric Shepherd Productions is proud to announce that worldwide best-selling sci-fi writer Philip K. Dick’s award-winning DO ANDROIDS DREAM OF ELECTRIC SHEEP? is coming to comics this June. While Richard Starkings’ Comicraft has committed to letter the entire series. The Eisner-award winner has won “Best Letterer” six times in a row from The Comic Buyers’ Guide and “Best Letterer” nine times in a row from Wizard Magazine and revolutionized comic book lettering digitally with his company Comicraft.

“Anyone who’s been paying attention to ELEPHANTMEN knows I have a special place in my heart for BLADE RUNNER and Philip K. Dick,” said Richard Starkings. “I read DO ANDROIDS DREAM OF ELECTRIC SHEEP? when I was a teenager and have been working my way through Dick’s novels ever since. It’s really nice to be involved with the comic book. ‘Nice’ is English for ‘Awesome,’ by the way.”

The first issue of BOOM! Studios’ DO ANDROIDS DREAM OF ELECTRIC SHEEP? will include backmatter by Warren Ellis and ships with three covers in a 50/25/25 split by Denis Calero, Bill Sienkiewicz and Scott Keating. A fourth cover by ELEPHANTMEN artist Moritat will be offered as a 1-in-25 incentive.

Along with Starkings for the full 24 issue run will be Tony Parker (WARHAMMER 40,000: FIRE AND HONOUR) on line art and Blond (ULTIMATE FANTASTIC FOUR) on colors.

DO ANDROIDS DREAM OF ELECTRIC SHEEP? ships this June (Diamond Code APR090725) and will present the full text of the novel fully illustrated, mixing all new panel-to-panel continuity in an innovative, ground-breaking 24-issue maxi-series experiment.

“Philip Dick, to my mind, was the great visionary writer of the 20th Century.”
– Warren Ellis