Picture Proof That Aliens Exsist? No, Not Really

No, not quite. What seems to be creepy preserved bodies of aliens are in actuality just Jenny Haniver… 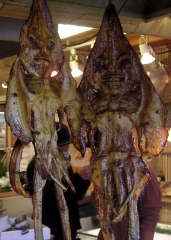 Is it the end of the world as we know it? No, not quite. What seems to be creepy preserved bodies of aliens are in actuality just “Jenny Hanivers” or carcasses of rays or a skate at fish markets in Japan.

From Wiki:
A Jenny Haniver is the carcass of a ray or a skate which has been modified and subsequently dried, resulting in a grotesque preserved specimen.

One suggestion for the origin of the term was “jeune d’Anvers” (French for Antwerp is Anvers), that is “young girl of Antwerp.” British sailors “cockneyed” this description into the personal name “Jenny Hanvers.”

For centuries, sailors sat on the Antwerp docks and carved these “mermaids” out of dried cuttlefish. They then preserved them further with a coat of varnish. They supported themselves by selling their artistic creations to working sailors as well as to tourists visiting the docks.

Jenny Hanivers have been created to look like devils, angels and dragons. Some writers have suggested the sea monkey may have been a Jenny Haniver.

The earliest known picture of a Jenny Haniver appeared in Konrad Gesner’s Historia Animalium vol. IV in 1558. Gesner warned that these were merely disfigured rays, and should not be believed to be miniature dragons or monsters, which was a popular misconception at the time. It is possible that Jenny Hanivers were the source of some tales of dragons during the Middle Ages, and they affirmed people’s belief in dragons. Jenny Hanivers may also have started the legends of Mermaids.