What a Waste of Great Tequila! 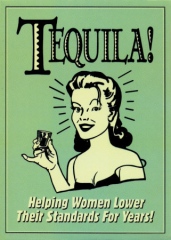 According to a new paper that’s just been published by arxiv.org, a team of Mexican scientists found that the heated vapor from 80-proof (40% alcohol) tequila blanco, when deposited on a silicon or stainless steel substrate, can form diamond films.

Original experiments used organic solutions such as acetone, ethanol, and methanol. The scientists then noticed that the perfect compound of 40 percent ethanol and 60 percent water was similar to the proportion used in tequila.

“To dissipate any doubts, one morning on the way to the lab I bought a pocket-size bottle of cheap white tequila and we did some tests,” Apátiga said. “We were in doubt over whether the great amount of chemicals present in tequila, other than water and ethanol, would contaminate or obstruct the process, it turned out to be not so. The results were amazing, same as with the ethanol and water compound, we obtained almost spherical shaped diamonds of nanometric size. There is no doubt; tequila has the exact proportion of carbon, hydrogen and oxygen atoms necessary to form diamonds.”

The final diamond film was hard and heat-resistant – properties that could make the diamond useful as coatings for cutting tools, high-power semiconductors, radiation detectors and optical-electronic devices.

The product should be ready for commercial application in 2011, but for now, they are just testing different tequilas to figure out which one gives them the best diamonds/ margaritas.

One thought on “Scientists Turn Tequila Into Diamonds”