The special episode features a story by Lost Co-Creator Damon Lindelof, and Terry O’Quinn (John Locke) will be voicing a polar bear in the episode.

Phineas and Ferb have been on a tear over the last year, becoming one of the most pop culture reference inclusive cartoons ever created. Sure, the Marvel and Star Wars episodes only really happened because they are all owned by Disney, but they have gone way past that. Along with the recently announced episode which will feature Simon Pegg and Nick Frost as their characters from Shaun of The Dead, Disney XD has just announced that they’ll be airing a Lost themed episode on September 29th.

The special episode features a story by Lost Co-Creator (and creator of The Leftovers) Damon Lindelof, and has been titled: “Lost in Danville.” As an added treat, Lost Alum, Terry O’Quinn (John Locke) will be voicing a polar bear in the episode.

Here’s the first image from the episode, along with the official synopsis.

A mysterious locked capsule falls into Phineas and Ferb’s back yard and they struggle to open it, only to discover they have unleashed something they cannot control. Meanwhile, Perry learns that Dr. Doofenshmirtz has been abducted and tracks him to Seattle where another evil scientist, Professor Mystery, has his own sinister plan. Terry O’Quinn voices Professor Mystery, with Jane Kaczmarek and Rob Morrow as capsule inhabitants Denise and Bernie. 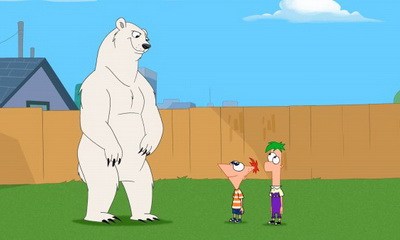