Pom Klementieff Role in GUARDIANS OF THE GALAXY 2 Revealed

When it was first announced that Pom Klementieff would be joining the cast of Marvel’s Guardians of the Galaxy 2, no one really had any idea who she would be playing. Now, it’s been announced that she will be playing the one time Avenger, Mantis. 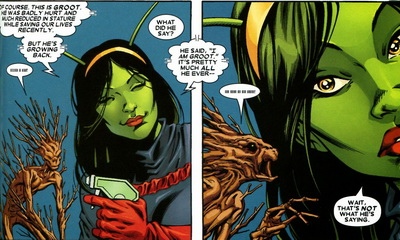 We don’t really know what part to play she’ll have in the story, other than the fact that it has been reported that she has a Key Role in the story. Here’s

If you aren’t familiar with the character, here’s what Wikipedia has to say about her story:

Mantis is the half-Vietnamese, half-German daughter of Gustav Brandt—Libra—and was born in Huế, Vietnam. In her childhood, her father leaves her in Vietnam at the Temple of the alien Priests of Pama, a sect of the Kree. The Kree believe she might become the Celestial Madonna and mate with the eldest Cotati on Earth to become the mother of the Celestial Messiah, “the most important being in the universe.”

She excels in her martial arts studies, but when she reaches adulthood, she is mind-wiped and sent into the world to gain life experience. She becomes a prostitute and barmaid in a Vietnamese bar, where she meets the Swordsman. She helps him regain his self-respect and follows him when the former villain attempts to rejoin the Avengers. She became an Avengers ally when the Swordsman rejoined the Avengers, and she battled the Lion God alongside them.

With the Avengers, Mantis had many adventures. She battled the original Zodiac, and learned that Libra was her father and that she was raised by the Priests of Pama. She encountered the Star-Stalker, battled Thanos, Klaw and Solarr, Nuklo, and then alongside the Avengers, Fantastic Four, and Inhumans, she faced Ultron at the wedding of Quicksilver and Crystal.

Mantis becomes taken with the Vision, and—although rejected by the android—neglects the Swordsman. Alongside the Scarlet Witch and Agatha Harkness, she was abducted by Kang. She was revealed as the Celestial Madonna and witnessed the death of the Swordsman at the hands of Kang, only realizing the depth of her love for the Swordsman just as he dies. She then buried the Swordsman, and battled the Titanic Three. She would learn the origins of the Kree-Skrull War, the Cotati, and the Priests of Pama. Mantis then formally joined the Avengers and is revealed to be, indeed, the Celestial Madonna and marries a Cotati in the reanimated body of the Swordsman, leaving the Avengers and the Earth to mate with him.

She joins a star-filled returning cast that includes: Chris Pratt, Zoe Saldana, Dave Bautista, Benicio Del Toro, and the voices of Bradley Cooper and Vin Diesel. Guardians of the Galaxy Vol. 2 opens in theaters on May 5, 2017