Warner Bros. has released yet another new “Green Lantern” movie poster and banner which shows off Hal Jordan, Sinestro, Kilwog, Tomar-Re and the rest of the Green Lantern Crops. This is really just an amalgamation of all the previous character posters but it’s probably the best looking one. Whereas the banner is mostly new and gives us a better look at all the other Green Lantern members that were briefly shown in the Wondercon spot. 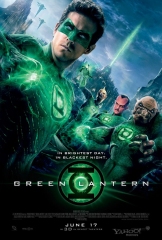