Could this be the first step in adding Ant-Man to the Avengers Roster?

Could this be the first step in adding Ant-Man to the Avengers Roster? There’s no denying that The Avengers was a huge smash. Now it is time to turn an eye to the next film and the other Marvel characters who might join the fray.

Edgar Wright, the man who brought Scott Pilgrim to life is the force behind bringing Ant-Man to the screen and based on the words of Marvel Studios’ President of Production Kevin Feige, we are closer than ever to making it a reality.

Here’s what Feige had to say:
“It’s as close as it’s ever been. Edgar is getting excited to get behind the camera again and start some advanced prep work for Ant-Man… We are going to take some forward steps in a few months that will bring it closer than ever. In terms of release date, I don’t know.”

Then, this note popped up on twitter from Wright over the weekend.
“Received this in the mail. What can it mean?” 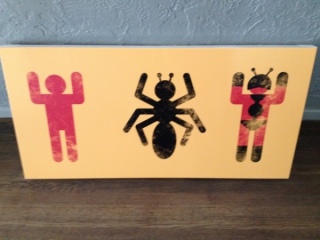 Indeed… what does it mean?