Lionsgate has officially announced that the principal photography for the much anticipated Gary Ross big screen directed adaptation of “The Hunger Games” has wrapped. 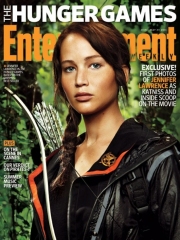 Lionsgate has officially announced that the principal photography for the much anticipated Gary Ross big screen directed adaptation of “The Hunger Games” has wrapped. The movie is set to be released in theaters on March 23rd, 2012. We’ve seen a bunch of screens and a pretty awful teaser trailer, it’s only a matter of time before we get the official theatrical trailer! Can’t wait!

Here’s the official press release:
LIONSGATE®, a leading global entertainment company, today announced the close of principal photography on the highly anticipated film adaptation of Suzanne Collins’ runaway bestselling novel The Hunger Games. Lionsgate will release THE HUNGER GAMES on March 23, 2012. The film is the first in a series that Lionsgate is making based on the book trilogy that has become a worldwide phenomenon.

Filmed entirely in North Carolina, the locations spanned from a dense forest in which the arena that hosts the games themselves was created to a town that stood in for Katniss’ home, District 12, to a sound stage that was the platform for the fantastical sights and sounds of The Capitol, the futuristic capital city of the nation of Panem. Principal photography on the 84 day production began on May 23rd.

“It has been an absolute thrill watching THE HUNGER GAMES, a project that has truly become part of Lionsgate’s DNA since our acquisition of the book in 2009, come to life. What I observed on set was impressive on every level, and reinforced my confidence that we have assembled precisely the right team to bring Suzanne Collins’ brilliant novel to the big screen,” said Joe Drake, Lionsgate’s co-COO and Motion Picture Group President.

Although the intensely anticipated sets were closed to press and visitors, Lionsgate and the filmmakers were able to reach out and touch the incredibly eager fans several times during the production process.

Lionsgate debuted the central cast trio through two Entertainment Weekly covers, featuring Jennifer Lawrence in character as Katniss and Josh Hutcherson and Liam Hemsworth in character as Peeta and Gale. It marked the first time that a studio has revealed a principal cast of film characters on sequential national magazine covers.

Winners of “The Ultimate Hunger Games Fan Sweeps,” a global contest where fans entered to win the opportunity to be flown to the set of THE HUNGER GAMES, was the one exception to the film’s closed set policy. In mid August, five winners from around the world and their guests got a glimpse of the sets, observed the filming of a scene and met the cast.

A heavily promoted first look at footage from the film debuted on MTV’s 2011 Video Music Awards on August 28th. The show attracted MTV’s biggest audience in the network’s history with a record-breaking 12.4 million total viewers.

About THE HUNGER GAMES

Every year in the ruins of what was once North America, the nation of Panem forces each of its twelve districts to send a teenage boy and girl to compete in the Hunger Games. Part twisted entertainment, part government intimidation tactic, the Hunger Games are a nationally televised event in which “Tributes” must fight with one another until one survivor remains.

THE HUNGER GAMES is directed by Gary Ross, and produced by Nina Jacobson’s Color Force in tandem with producer Jon Kilik. Suzanne Collins’ best-selling novel, the first in the trilogy published by Scholastic that has over 12 million copies in print in the United States alone, has developed a massive global following.

Lionsgate will release THE HUNGER GAMES on March 23, 2012.