I really hate when people mess with my favorite films by remaking them… but I can’t help but be very curious.

I really hate when people mess with my favorite films by remaking them… but I can’t help but be very curious. 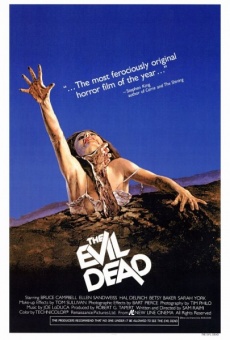 Here’s the official release:
Los Angeles, May 04, 2012 – Principal photography has begun on Evil Dead in Auckland, New Zealand, and will wrap in early July 2012.

Ghost House Pictures is producing the much anticipated remake of Sam Raimi’s 1981 cult-hit horror film The Evil Dead; the film that effectively launched the careers of Sam Raimi (Spider-Man franchise); Rob Tapert (30 Days of Night) and Bruce Campbell who played the Ash character and was Co-Producer of the original, now brings them back to produce an Evil Dead for today’s audience that’s high on the horror, gore, plot twists and more from a screenplay written by Fede Alvarez and Rodo Sayagues. Executive Producers are J.R. Young, Nathan Kahane, Joseph Drake and Peter Schlessel.

Sony Pictures Worldwide Acquisitions (SPWA) and FilmDistrict have partnered with Ghost House Pictures on a worldwide deal – excluding U.K. and France – for Sony Pictures to distribute the remake of Evil Dead.

Five twenty-something friends become holed up in a remote cabin where they discover a Book Of The Dead and unwittingly summon up dormant demons living in the nearby woods, which possess the youngsters in succession until only one is left intact to fight for survival.

“This cast of burgeoning talent share the same spirit we had when creating the original,” says Tapert. “The desire to deliver an unexpected and outrageously scary movie experience for the audience.”

Evil Dead marks director Fede Alvarez’ feature debut. Originally from Uruguay, Alvarez studied filmmaking and communications, later opening his own production and post production company. In 2005 he won a scholarship to complete a masters in screenwriting in Amsterdam. In November 2009, he posted his four-minute short Panic Attack!, which became an instant viral internet phenomenon prompting intense interest from Hollywood and Ghost House Pictures in particular.

“We found a brilliant artist in Fede Alvarez. As a director, he understands what makes a story work and how to put the pieces together,” says Raimi. “I’m really excited to see this story, that I care deeply about, retold by such a fine storyteller.”