A Victoria’s Secret model, Huntington-Whiteley has been made an offer to become Sam’s new love interest. 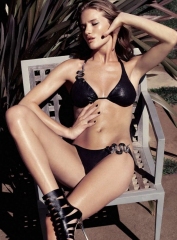 The Sun is reporting that British model Rosie Huntington-Whiteley will replace the outspoken Megan Fox in Michael Bay’s “Transformers 3.”

A Victoria’s Secret model, Huntington-Whiteley has been made an offer to become Sam’s new love interest. Here’s the report from the The Sun:

Jaw-droppingly gorgeous ROSIE HUNTINGTON-WHITELEY will take over as the leading lady in upcoming blockbuster Transformers 3.

The British Victoria’s Secret model, 23, has been offered the role in the sequel – after Megan sensationally quit the franchise last week.

Director MICHAEL BAY reportedly came to blows with the actress over her plummeting weight.

While this is complete news to me, it wouldn’t surprise me if they did replace a hot talentless actress with a hot model with no acting experience, since they are virtually the same thing.

Studios have not confirmed this report and calls have been unanswered, but several news outlets are reporting that it is in fact true and that Rosie Huntington-Whiteley has it all but in the bag. More on this as it develops.