“I have not been offered squat. I do not have the part and haven’t read a script.” 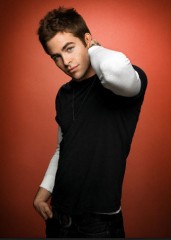 According to MTV, while Chris Pine may show up in theaters as the new James T. Kirk for the new “Star Trek” reboot, he has not been offered the role to play DC’s legendary Emerald knight, Hal Jordan. As it turns out, while discussion has taken place, nothing is confirmed for Pine to appear in Warner Bros’. new “Green Lantern” film.

“No, I had a meeting with [casting director] Pam Dixon and [executive producer] Donald De Line, but a meeting was all it was,” Pine told MTV News. “I have not been offered squat. I do not have the part and haven’t read a script.”

While Pine has not eliminated the possibility that he still might be offered the Hal Jordan role, he has pretty much done the opposite of endearing comic book fans by admitting that he is not a big fan of comic books and does not particularly care about playing any particular superhero.

According to Pine, “I’m a fan of stories. So if there’s a story to be told, I love to tell a good story. But there’s not a particular superhero or comic book character that I’d like to play.”