“The Batmobile is currently being designed and built by General Motors at the GM Advanced Design Studio in North Hollywood.”

I was never a big fan of the Tumbler that Batman used in the last three films. They were just too tactical. For me, the best Batmobile was the one from the 1990’s animated series and the one from the first Tim Burton film.

Here’s what a snitch told the guys at Batman on Film:
“The Batmobile is currently being designed and built by General Motors at the GM Advanced Design Studio in North Hollywood. This is the same team who most recently designed and built the vehicles for TRANSFORMERS 4 with Michael Bay – who was very hands-on and involved in the design/building process for the new Bumblebee Camaro. Anyway, back to the new Batmobile…”

“It will definitely NOT have a military look like The Tumbler from [Chris] Nolan’s ‘Dark Knight Trilogy.’

He went on to say that the vehicle will have the look and feel of an “old Cadillac.” I’m really hoping that this is true. My favorite non-official Batmobile is actually a toy that came out several years ago from Corgi of the “1940’s roadster Batmobile” 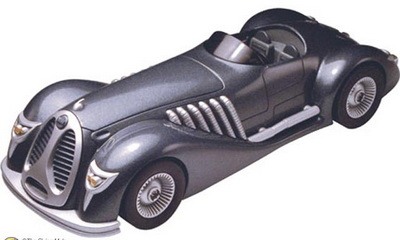