Rumor: Possible Plot Details Revealed for PIRATES OF THE CARIBBEAN 5

” There is also a ghost in a lead role, a former member of the British military who is now sided with Captain Barbossa.”

Pirates of the Caribbean 5 might be getting pushed back in the wake of The Lone Ranger’s horrible showing at the box office, but that doesn’t mean we still can’t find some news about the film that will eventually get made.

Here’s what we know about the movie, care of Bleeding Cool:

Keep in mind, this is all based on an early draft of the script, so some or all of this might change by the time it ends up on film.

– Witchcraft and witches play a very central role to the story.

– There’s a new female lead who will be a sparring partner for Jack Sparrow. She is suspected of witchcraft but is actually a woman of science.

– There is also a ghost in a lead role, a former member of the British military who is now sided with Captain Barbossa.

– Two pretty young Brits from farming families play into a subplot, filling the Orlando Bloom and Keira Knightley roles from the initial trilogy.

– The film begins with “a rather awkward wedding” and the climax involves the myth of the Bermuda Triangle. 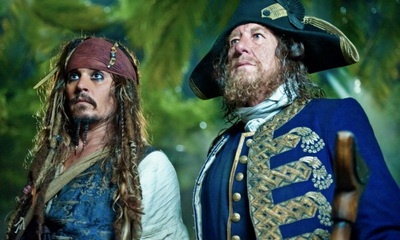