Who knew that joking about rape could make a female anchorwoman so uncomfortable….
NSFW for Language.

The Dictator comes out in theaters in Australia this week and in the US on the 16th of May. To help promote the film down under, Sacha Baron Cohen appeared as General Aladeen on the Australian version of The Today Show where he managed to make the anchors super uncomfortable and highly offended.

Apparently, jokes about rape don’t go over too well there. Honestly, I’m not a big fan of most Sacha Baron Cohen films, but I love watching him screw with the media in live interactions. It is probably why I still think he peaked with Da Ali G Show. 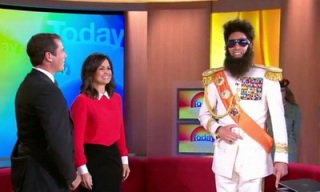