New ‘Tron: Legacy’ images have been released and just like the impressive teaser shown at SDCC, it’s gotten a whole lot of ‘Tron’ fans anxious and riled up.

New ‘Tron: Legacy’ images have been released and just like the impressive teaser trailer that was shown at SDCC, it’s gotten a whole lot of ‘Tron’ fans anxious and riled up.

The images include a teaser poster featuring “Legacy” star Garrett Hedlund as Sam Flynn in the classic bike race, and another, a still with Hedlund and Olivia Wilde’s as-yet unnamed ‘friend/love interest.’

Disney’s and Joseph Kosinski’s “Tron: Legacy” is set to be a FX heavy film considered part reboot and part sequel. While we’re taking a peak at screens in 2009, “Legacy” isn’t expected to hit until December, 17 2010. Aww, I know. I know.

In the meantime, check out the images and SDCC trailer below: 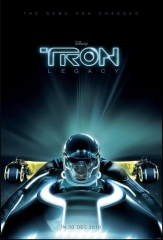 Sam Flynn (GARRETT HEDLUND), the tech-savvy 27-year-old son of Kevin Flynn (JEFF BRIDGES), looks into his father’s disappearance and finds himself pulled into the digital world of Tron where his father has been living for 25 years. Along with Kevin’s loyal confidant Quorra (OLIVIA WILDE), father and son embark on a life-and-death journey of escape across a visually-stunning cyber universe that has become far more advanced and exceedingly dangerous.