Scarlett Johansson’s character in Iron Man 2, may soon get her own feature but not until after the Avengers movie.

Recently, Kevin Feige Marvel’s president of production was asked about a possible Black Widow movie starring Scarlett Johansson. Here’s what he had to say:

“We’ve already started discussions with Scarlett about the idea of a solo movie and have begun putting together concepts, but The Avengers comes first.”

Am I looking forward yet also dreading a spinoff? Absolutely. Who doesn’t want to watch a movie where Johansson is punching baddies in tight black lycra? Hopefully if Marvel is committed to this project, they go all out 007 style and make it one of the best spy thrillers it could possibly be. Otherwise it’ll fall quickly to the wayside in the likes of “Catwoman” and “Elektra”… beautiful women in skimpy costumes in really awful movies. 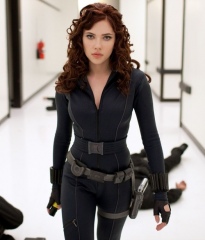