Former Superman alumni, Teri Hatcher will join the cast of “Smallville” in their upcoming 10th season.

Former Superman alumni, Teri Hatcher will join the cast of “Smallville” in their upcoming 10th season. Teri Hatcher, who played Lois Lane in the 90s’ ABC TV series “The New Adventures of Lois and Clark” has been cast as Lois Lane’s mom in the final season on “Smalliville.”

This news comes directly from Entertainment Weekly who says:

I know what you’re thinking: But Lois’ mom, Ella, is dead! Follow along now…

In episode 8, titled “Abandoned,” Lois discovers old videotapes of her mother. I think you can figure the rest out for yourself. Am I right?

Tune in this Friday for the premiere of the 10th and final season of “Smallville.” 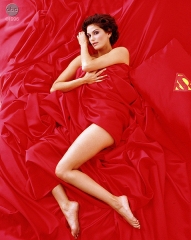