Another New ‘Toy Story 3’ Image Finds Its Way On Online

Empire Online has snagged an exclusive still of Disney/Pixar “Toy Story 3.” In this new image we see our toy box heroes – Woody, Buzz, Jessie, Slinky, Rex, Hamm, Mr & Mrs. Potato Head, the Aliens, and Bullseye – abandoned at a day care center by their former owner, Andy, who goes off to college.

I don’t know what’s up with Mrs. Potato Head, but in every shot of her so far she’s missing an eye. Aside from the usual cast, a bunch of new characters are also expected to debut. Making “Toy Story 3” a must see film in 2010.

If you’re curious to learn more about “Toy Story 3” and to see this image in hi-res, two-page glory, be sure to pick up the newest issue of Empire which hits shelves this January first! 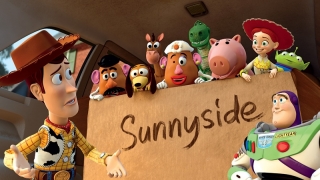