Two years ago, a car accident left her with nerve damage in her pelvis which controls desire, leaving it permanently switched on. 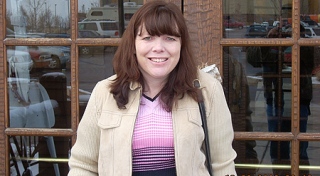 Joleen Baughman’s life is been made “unbearable” due to a car cash injury that left her constantly craving sex.

Two years ago, a car accident left her with nerve damage in her pelvis which controls desire, leaving it permanently switched on.

Since then, Joleen, 39, becomes aroused by even the slightest movement – while vacuuming, sitting on a bus, bending over or walking across a room.

“It’s unbearable. Just my clothes rubbing gets me so aroused that I can hardly think straight.

“It’s very embarrassing and it’s impossible to concentrate,” she says.

The mother of two has officially been diagnosed with a rare condition known as Restless Genital Syndrome or Persistent Sexual Arousal.

Even regular sex with husband of 20 years does not alleviate her symptoms.

Adding, “We’d have sex once and I’d feel no release at all.

“So we’d go again and then it would start really hurting but I would still want sex, even more than before.

“If my husband managed to go for a third time it would be agony but I would still feel no release.

“Being aroused pretty much 24-hours a day is exhausting.

“It’s so embarrassing. I have to try to keep my feelings under control and to ignore them so I can get on with normal life.

“But I often worry people can guess what I’m feeling even though they can’t.”

Joleen, who has to take sleeping pills at night, added: “If my urges get really strong I lie down very still so there is no vibration at all and that helps a little bit.

“It’s mind over matter. But I’m hoping a medical cure can be found in the future.”