the Light Runner, which is like a light cycle, but can hold 2 passengers. It is said to be very fast, and has the unique ability to go off the grid on its own power 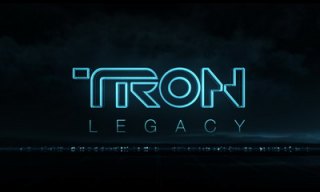 People have been waiting for a Tron sequel almost as long as the original movie has been out. For years, rumors floated around and last year Disney even showed a teaser for a sequel just to see how people would react to the idea. Well, fans at Comic Con this year got a special treat. Not only were they the first to learn the new name of the Tron Sequel, but they got to see some pretty damned amazing concept art from the movie during a panel presentation Thursday afternoon.

Along with the pics, they also showed a rough cut of an early scene from the movie. In the scene Kevin’s (Jeff Bridges) son shows up at his father’s abandoned office to find a room full of Arcade machines. At the end of a long row of games he finds the classic Tron game. It won’t take his quarter so he checks out the back of the machine where he finds a door. He opens the door and enters into the blackness.. end scene.

If you are already waiting for the movie with bated breath… slow your roll. because as excited the director was to talk about the brand new things they’ll be doing for Tron Legacy, he said that he’d be revealing them next year at Comic Con 2010… That means there’s at least a year until the movie comes out.

TRON is a 3D high-tech adventure set in a digital world that’s unlike anything ever captured on the big screen. Sam Flynn (GARRETT HEDLUND), the tech-savvy 27-year-old son of Kevin Flynn (JEFF BRIDGES), looks into his father’s disappearance and finds himself pulled into the same world of fierce programs and gladiatorial games where his father has been living for 25 years. Along with Kevin’s loyal confidant (OLIVIA WILDE), father and son embark on a life-and-death journey across a visually-stunning cyber universe that has become far more advanced and exceedingly dangerous.

Solar sailer, a freight train in the world of tron, which travels on a beam of light.

Light Runner, which is like a light cycle, but can hold 2 passengers. It is said to be very fast, and has the unique ability to go off the grid on its own power

The Light Cycle: a much more evolved version of the light cycle which many saw in the trailer from last year’s con. 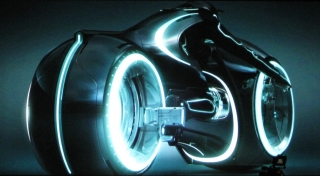 Second Generation Light Cycle: Designed in 1989 by Kevin Flynn and “rumor has it its still the fastest thing on the grid” It looks like an inbetween model in the evolution of light cycles, incorporating some of the look of the first film and the realness and slickness of the new design.