If there was one thing you HAD to see at SDCC it was the panel for AMC’s “The Walking Dead.” 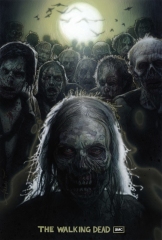 If there was one thing you HAD to see at SDCC it was the panel for AMC’s “The Walking Dead.” It had a little of everything in appearances from the full cast and crew, as well discussion on the comic book series, the new series and the development of the show.

Director/writer Frank Darabont spoke vividly about his love of the original source material by Robert Kirkman who is actually very involved with the series and is writing the script for episode 4.

Similar to the comics, the show will be character driven and is said to push the limits of cable TV. There will be a ton of zombies and there will be a lot of gore. All the zombies are styled after the zombies from the comic book and the actors who played them had to be really thin. Because, well, zombies are constantly starving and wasting away. Exceptions were made for Tony Moore, artist of the comic book, who had the chance to play a zombie in the show.

Each of the six episodes will be one hour long. There will be things similar to the comics, but it also spin off into new things that has never been done. It’s done for creative purposes as well as to offer new material for fans of the comic book series.

Bear Mccreary (Battlestar Galactica) will also be providing music for the series.

An excellent footage was shown that revealed a ton of zombies that, once released, will blow all Walking Dead fans away. To say it’s the best looking zombie film to date is an understatement. AMC has a winner here and they’d be stupid to cancel it after six episodes.

The footage opens with a police blockade and a high speed chase. Rick, the main character, gets wounded and the video cuts to him waking up in an abandoned hospital with corpses everywhere.

The footage then cuts to several sequences of zombies in action. Rick blows away a little zombie girl with a gun. Rick runs into zombie hordes and more zombie hordes. It then ends with Rick trying to shoot his way out out a tank he had climbed into as the camera pans to an aerial view of… you guessed it, more zombies.