Following “The Last Airbender: The Legend of Korra” panel today at SDCC, Nicktoons has releases the teaser trailer which you can watch now!

Following “The Last Airbender: The Legend of Korra” panel today at SDCC, Nicktoons has releases the teaser trailer which you can watch below!

According to producers “Legend of Korra” takes place 70 years after the last Avatar and that things will be radically different. Fans were shown some stills of Korra as well as her new friends.

While Aang had Appa, the flying bison, Korra will have Naga, a polar bear dog. Accompanying her will also be a red panda fetter called a Fire Ferret.

Korra is not the love child of Aang and Katara, but rather an Avatar reincarnation. Similar to how Aang was. In the show, Korra will be under the tutelage of an Airbender named Kenzen. We are also introduced to Kenzen’s family who I believe are not benders.

The principal villain(s) are mysterious masked men who are part of “The Revolution.” They are said to have chi-blocking powers that can cancel out any types of bending. It seems like they’re the anarchist type and are unhappy with Utopia. I’m sure there’s more to this however.

Similar to the Kyoshi warriors, “The Legend of Korra” will have Metalbender Cops. A group of bender enforcers that govern Republic City who’s led by Toph’s daughter!

Overall, the show is very different than its predecessor but it still has the same look and feel. It takes a little bit of getting use to, and you can actually feel that years have gone by since the last war.

As of now, no premiere date has been announced, but animation has been underway. 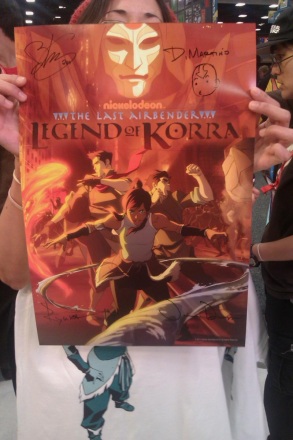