It is the words that Gaiman fans have been longing to hear and the news was finally announced at Comic Con. Neil Gaiman is coming back to Sandman!

It is the words that Gaiman fans have been longing to hear and the news was finally announced at Comic Con. Neil Gaiman is coming back to Sandman!

Twenty-five years after one of the most celebrated graphic novels of all-time hit shelves, award winning and critically acclaimed author and screenwriter, Neil Gaiman, announces his return to THE SANDMAN. Gaiman made the surprise announcement, via video, at DC Entertainment’s Vertigo panel at this year’s San Diego Comic-Con. Karen Berger, Executive Editor of Vertigo, then revealed that Gaiman is paired with artist, JH Williams III (BATWOMAN) for the series, who appeared on stage to an already stunned and elated crowd. THE SANDMAN mini-series will be published by Vertigo in 2013.

One of the few graphic novels ever to be on the New York Times Best Seller list and lauded by critics the world over, THE SANDMAN is credited with changing the path of storytelling in the comic book industry. Gaiman will pick up his pen for the first time in more than 10 years since ending the series to continue a story that he feels still has yet to be told.

“When I finished writing THE SANDMAN, there was one tale still untold. The story of what had happened to Morpheus to allow him to be so easily captured in THE SANDMAN #1, and why he was returned from far away, exhausted beyond imagining, and dressed for war. It was a story that we discussed telling for Sandman’s 20th anniversary… but the time got away from us. And now, with Sandman’s 25th anniversary year coming up, I’m delighted, and nervous, that that story is finally going to be told,” said Gaiman.

“There’s nothing like a Neil Gaiman story,” said Berger, “and there’s nothing like having Neil back home on THE SANDMAN, his dark, soulful, literary epic that transformed comics and continues to captivate countless new readers year after year. Working with him again, and with JH Williams, the extraordinary and groundbreaking artist, is truly the stuff dreams are made of.”

DC Entertainment Co-Publishers Jim Lee and Dan DiDio added, “As accomplished as Neil Gaiman is in other media—whether it be novels, film and even music—he still has an incredible passion and love for comics. It’s exciting to have him back. J.H. Williams will be the perfect complement to Neil’s writing. He has a history of creating art that pushes the boundaries of the medium.”

Each issue of THE SANDMAN mini-series will be published day-and-date digitally. The title will be announced at a later date. 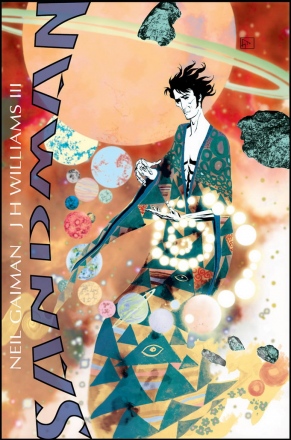