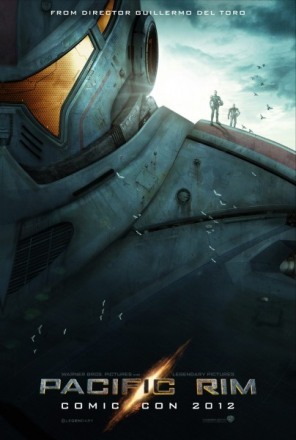 If there was one movie that I was excited to see and hear about this year at Comic Con, it would have to be Pacific Rim. Sure, the Hobbit is a close second, but Pacific Rim is from Guillermo Del Toro
and I’ve had huge hopes for it since I first heard of its existence. On the off chance that you haven’t heard of it yet, Pacific Rim is the story of Giant Earth crushing monsters who rise out of the pacific ocean and the giant, manned robots who fight them.

Today we got a chance to hear from the cast and crew and to see the first snippets of footage. Sadly, no more footage will be seen by anyone until Christmas.

Chris Hardwick, the king of Comic Con panel MCing came out and introduced the head of Legendary films, Thomas Tull. The room went dark and the screens lit up with the movie logo.

When Guillermo Del Toro took the stage, he got such loud applause that he said “I am shitting in my pa nts, really. I bought pants twice my size, so I’m okay.”

Del Toro talked about how great it was that the film came to him just as At the Mountains of Madness and Hobbit crapped out on him. He also talked about making it more than just a popcorn film, but a movie with actual emotional content and that would blow people’s minds with the scale of it.

Before they ran a clip, Del Toro explained that the robots in the film were each piloted by two people. One for each hemisphere of the robot.

The footage opened with a old man and a young boy using a metal detector in some snow-covered landscape, before it started beeping wildly and a ginormous mechanized foot came out of the water. The Jaeger was then revealed (as seen in the first poster), and this thing is absolutely massive. We saw shots of Hunnam and Riko in their suits, hooking themselves up to what looks like an elliptical in order to control the robots.

We got very few, very brief looks at the actual Kaiju creatures, but from what I could make out it looked like one of them had a head like a hammer-head shark. Both the Kaiju and Jaegers were created using CG, so there were no practical effects on the actual monsters that I could tell. Their exterior looks to be hardened, with giant claws that rip through a bridge full of cars. We didn’t see much dialogue, but my favorite part of the footage was actually seeing the sci-fi world that del Toro has built for these characters to play in; the suits, the costumes, the mechanical environments.

After the footage Del Toro made it clear that he wasn’t trying to create a homage to two genres, he actually wanted to create something new. He also re-iterated that the movie was first and foremost about humanity and emotion.

When it came to direction, he said he wanted people to feel what it was like to be standing next to something the size of a skyscraper while it is fighting a hurricane.

The movie will include 9 different Kaiju and six different mechs.

A child asked Del Toro about what happens if one of the mech pilots is incapacitated, and He responded that the question will be answered in the film.

To give the monsters a more organic feel, Del Toro tried to dirty the camera lenses with Oil and water and by scratching it so that you get the real feel of the monsters.

– Del Toro was very clear that there is no Motion Capture in the film. The robots move like robots, not like people.