Twilight wasn’t the only film on tap at the panel, Meyers also showed off some scenes from her new film, ‘The Host’.

One of the biggest panels today was the Twilight ‘Breaking Dawn 2′ Panel. In attendance were Taylor Lautner, Robert Pattinson, Kristin Stewart, Mackenzie Foy and author Stephenie Meyer. Director Bill Condon also made an appearance via satellite. The panel was a sparkly experience for Twihards who were treated to the first seven minutes of the final Twilight film which shows Kristen Stewart just after her transformation into a vampire as she slowly adapts to her new life… or unlife I guess.

Twilight wasn’t the only film on tap at the panel. Yesterday it was rumored that there would be a surprise for fans. Today Meyers made good by showing off some scenes from her new film, ‘The Host’. It makes sense for her to have done it now. With Twilight coming to an end (YAY), she’s got to get her fans hooked on the next thing as soon as possible.

Here is the description of the scenes from The Host, as reported by Comingsoon.

The footage they showed, not unlike Breaking Dawn, began with Saorise Ronan’s character opening her eyes to reveal an inhuman coloration. She’s in some kind a facility and has just been taken over by an alien life force. Diane Kruger’s character (also taken over) talks to her and reveals that most of Earth has been invaded and that human bodies are conquered and controlled. This new girl was formerly a famous resistance fighter and she needs the alien inside her to probe her memories.

The scene turns to a series of flashbacks with, in each shot, much of the frame blurred. Ronan explains that the girl was named Melanie Stryder and that she managed to escape the early wave of attacks on Earth. We see a home in Louisana where Melanie’s father kills himself rather than let his body be taken by men in all-white suits with white ties.

When the alien in her body reveals that she has a brother, Melanie’s personality fights back in her head, furious that her own mind is being used against her.

We see the story progress and Melanie go on the run with her brother and Max Iron’s character. There’s also a scene of Irons and Ronan making out against the side of a trailer.

A (presumably later) scene has the inhabited-Melanie being led to a cave in a series of desert mountains. There are men there that want to kill her because they don’t trust the alien within her, but William Hurt’s character (dressed like a grizzled cowboy) comes in with a shotgun and stops them.

A final scene shows a caravan of still-human people moving in trucks down a highway. They’re stopped by a helicopter (the body of which is completely covered in mirrors) and then pursued by cars of a similar design. There’s gunfire and the trucks finally pull over, but two of the drivers decide to crash into a wall rather than let themselves be taken. The footage cuts just as they’re about to collide. 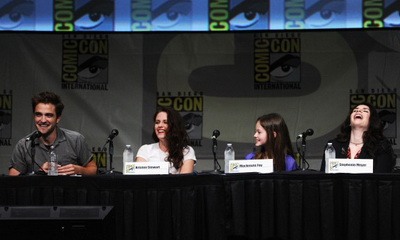