The panel started out with a new trailer for the film. It was an action heavy feature that was mainly focused on the battles between the Humans and the Buggers (aliens).

The hottest movie panel for Thursday at Comic Con was Ender’s Game. Based on the uber popular book series by Orson Scott Card, the first trailer for the movie had the entire internet buzzing.

The packed room was treated to a panel that included Chris Hardwicke as the moderator, Producer Bob Orci, director Gavin Hood, and stars Asa Butterfield, Hailee Steinfeld, and Harrison Ford.

The panel started out with a new trailer for the film. It was an action heavy feature that was mainly focused on the battles between the Humans and the Buggers (aliens). They also showed a bit of Harrison Ford as Col. Graff talking about Ender not being ready for war.

The producer of the film said that, even though he didn’t write the script himself, he was very strong minded about making sure that it was done in a way that people who hadn’t read the book could latch onto and love as much as the the people who have.

Hailee Steinfeld talked about how it was the first time that she ever had to physically train for a film. She talked about how they went to space camp and military boot camp for three weeks.

Director Gavin Hood talked about how he was drawn to the movies complexities and detailed environments. He went on to promise a that the movie will be great and that neither the story line nor the characters were compromised in the conversion from book to film.

There weren’t many really interesting questions. One person asked Harrison Ford if Han Solo would be a good soldier in the army of the film. He responded by saying that Solo is more of a solo operator and an independent contractor and that he wouldn’t work well in any army.

The one question that struck a chord with a lot of people was one asked about the controversy surrounding the film. Robert Orci responded to it by saying that the studio decided to use the attention to defend LGBT rights. He also tried to reinforce the story’s message about tolerance, empathy and compassion. 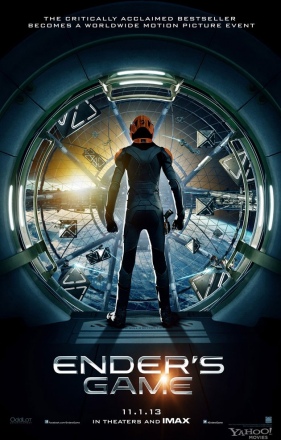