While the footage didn’t include much in the way of apes, we did get to see the first shot of Andy Serkis as a fully-rendered, and slightly older, Cesar.

One of the treats yesterday at the Fox panel was the update on Dawn of the Planet of the Apes. While the footage didn’t include much in the way of apes, we did get to see the first shot of Andy Serkis as a fully rendered, and slightly older, Cesar.

Here’s what Director Matt Reeves said about the evolution of Cesar in a recent interview:
“Caesar talks at the end of [Rise of the Planet of the Apes], he has some level of speech. I wanted to make sure we’re continuing to go along the path of evolution without missing it, it was so delicious to watch in the first movie. It’s not like now they are talking in verse. Hopefully the movie is emotional and thrilling as you watch the apes come into being …” 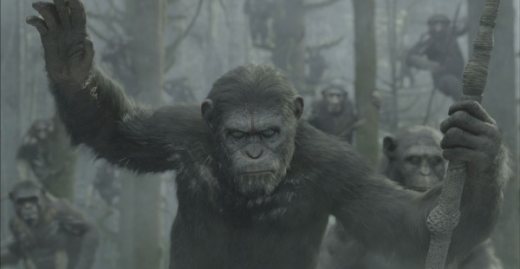 Official Synopsis:
A growing nation of genetically evolved apes led by Caesar is threatened by a band of human survivors of the devastating virus unleashed a decade earlier. They reach a fragile peace, but it proves short-lived, as both sides are brought to the brink of a war that will determine who will emerge as Earth¹s dominant species.