RoboCop made its panel debut Friday and what came with it was its first footage reveal and its trailer.

RoboCop made its panel debut Friday and what came with it was its first footage reveal and its trailer. Director Jose Padilha was present along with Samuel L. Jackson, Michael Keaton, Abbie Cornish, and Joel Kinnaman.

The first footage opened with Pat Noval (Samuel L. Jackson), announcing militarized robotics that are protecting freedom abroad. We see the new ED-209 patrolling on foreign ground along with 208s in the war-torn streets of Tehran. It’s his dream to bring these robots, which feels no emotions, to be used on American soil protecting neighborhoods. It’s brought up why Americans can’t have robots at home and we’re introduced to weapons manufacturer Raymond Sellars (Michael Keaton) who is at a congressional hearing debating whether it is safe to have robots on the streets. Sellars believes they can serve and protect… which then cuts to a flashback scene of machines slaughtering humans. A senator asks, “If a machine killed a child, what would it feel?” Ominously, Sellars replies, “Nothing.” Enter OCP, which will find a way to bring human consciousness into a robot…

The trailer was short but action heavy, and we got our first feel of how the movie will play out. We see that Alex is nearly killed in a car bomb and there are what seems to be flashbacks and first person perspective of RoboCop in action. There seems to be more emphasize on Alex’s family and some of the social commentary and satire from the original seems to remain intact. Overall, while it shares its name with the original, it does feel like a new movie or at least a heavily modernization version of the original. Overall it looked good, and it left a good impression on me but my exceptions will be tapered.

Be sure to check out OmniCorp’s viral website which was updated with new images and information about the various robots in the universe. 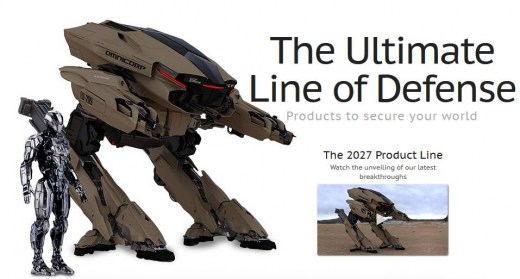