About the role of Electro, Jamie Foxx said he wanted him to be a serious villain who feels neglected by the world, even his mother forgot his birthday, and he wants to burn the city down.

The Amazing Spider-Man 2 panel capped off a giant show in Hall H from Sony films that started with Cloudy with a Chance of Meatballs 2, continued with Mortal Insturments: City of Bones, jumped up a notch with the new Robocop and then climaxed with one of the most anticipated SuperHero movie panels of the show. 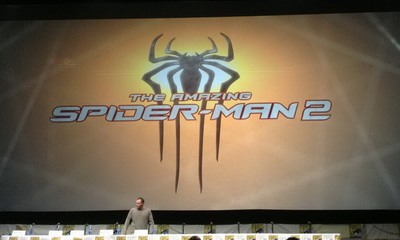 This year’s gimmick for introducing Andrew Garfield was a video of Spider-man trying to get into the convention, but security wouldn’t let him, so he climbs the building, sneaks in and then appeared on stage in full, new costume, and in character as Spider-Man.
Emma Stone was unable to attend, but she sent a video for the fans… or at least that’s what they want you to believe as the video suddenly gets interrupted by electro, and then Jamie Foxx comes out on stage.

– About the role of Electro, Jamie Foxx said he wanted him to be a serious villain who feels neglected by the world, even his mother forgot his birthday, and he wants to burn the city down.

– first clip previewed – early in the movie, Spider-man just having fun being Spidey. We then see some interaction between Gwen and Peter, a funny bit between Peter and Aunt May, followed by the origin of Electro, which is him falling into a tank of electric eels. We see Electro showing off his lightning bolts, a good amount of Paul Giamatti. It looks from the footage, like he’s strying to swipe the genetic formula from Oscorp, and that was pretty much it.

Other than that, Garfiled mentioned that he would love to see Spider-Man fight alongside the Avengers. Marc Webb said that he didn’t put too much into this movie. Electro is the main bad guy of the film. He also said that he was really inspired from the artwork in the Ultimate Spider-Man comics.