Watch Loki address the crowd, and then read our description of the new footage from Thor: The Dark World.

The final section of our coverage of the Marvel Panel in Hall H is actually the first part of today’s panel. We kept it for last because there really isn’t much to say. It started out extremely awesome. Tom Hiddleston came out on stage, in full Loki costume and addressed the audience in character. Then, we saw new footage for the film. Then, it was over. I’m actually surprised that there wasn’t more of a panel, when they made such a big showing for the other two films of the day.

then, we lead into the footage:

It starts with a battle. The warriors three are deep in battle when the rainbow bridge appears. Mjolnir comes through, hitting one of the bad guys, after that, Thor swoops in and slams his hammer against the ground, sending the enemies flying. Sif makes a quick save and prevents Thor from getting speared. A giant mud or rock monster appears over a hill, around 4x the size of Thor who tell is that he accepts his surrender before shattering him with his hammer. Then the logo for Marvel comes up on the screen.

The next scene puts us in London, with Jane Foster. Thor, once again enters through the rainbow bridge and gives her the line from the trailer about how he gave his word that he’d return one day. Then, they vanish and return to Asgard together.

We see more of the interaction from the trailer between Thor and Loki, still in prison. Thor says he needs Loki’s help and then hands him the broken mask of Malekith.

Next, we hear Eccleston’s voice as Malekith saying “Your family and your world will be extinguished.”

Jane, The warriors three, sif, Loki, and Thor all set off on a mission together, Jane talks about the fabric of reality being torn apart. Then, we see Sif threaten Loki not to betray Thor, Jane slap Loki in the face, followed by the really cheesy line: “That was for New York!” Then, we see Thor on the ground, Loki standing over him, and then Loki kicking him in the face. 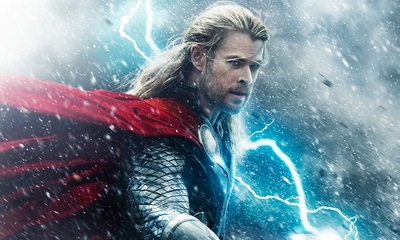