“There’s something out there waiting for us, and it ain’t no man…We’re all gonna die.”

If you had asked what the big surprise at the FOX panel would be a couple of days ago, everyone would probably guess that it would be the newly leaked news that X-Force would be heading to the big screen as part of FOX’s expanding Marvel Mutant empire.

Now, it’s looking like FOX might use the con to relaunch the Predator franchise. The clue came today on the long forgotten FB page for the film, Predators. On it, FOX posted an image with this quote from the original 1987 film:

“There’s something out there waiting for us, and it ain’t no man…We’re all gonna die.”

The image beneath the quote is a top-down view of San Diego’s Gaslamp Quarter.

If this is true, it will be a great cap on an amazing Hall H Panel that is already set to include: The Wolverine, Dawn of the Planet of the Apes and at least one “surprise”. 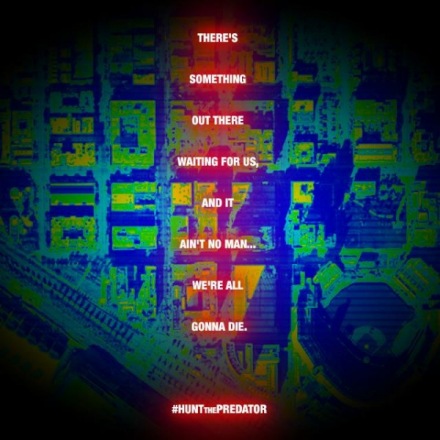