The panel opens with the cast shares some random anecdotal stories about what it’s been like being part of a major blockbuster. Ruffalo says people recognize him on the street as the Hulk. Hemsworth jokes that he’d like to see Thor turn into a woman, a nod to Marvel’s recent announcement of a female Thor. Jackson jokes about how he’s finally getting use to wearing an eye patch and doesn’t bump into things any more. Bettany claims he has to work for his money now, and his kids are finally interesting in what he does. Spander jokes about how he gets to play a 8-foot robot, which is something he’s never done before because he has only ever played humans. Olson saying it’s exciting because now there’s “magic,” and kids about staring at a pencil and trying to move it.

Via video messaging, director Joss Whedon shows a clip of the Avengers out of costume trying to lift Thor’s hammer. Tony is unable to and neither can Banner. Rodgers has better luck and makes Thor nervous. There’s a noise and lurking from no where is Ultron (seems like he’s made by old Iron Man parts) who tells them that they are unworthy and that “there’s only one path to peace… your extinction!” It cuts to several action clips. “This is the end,” says Tony. “The end of a path I started us on” We see Stark in his insanely awesome Hulkbuster armor fighting the Hulk. Ultron eerily saying “No string on me…” and then a cut to a shot of the Avengers battered and beaten. Tony wakes up to see that they’re scattered on an asteroid of sorts floating in space.

After the clip, Josh Brolin takes the stage wearing an Infinity Gauntlet. Feige then announces that he has more guests and we are greeted by James Gunn and Chris Pratt from a video message in London. They announce that “Guardian of the Galaxy 2” is happening and it’ll debut on July 28, 2017.

And exit stage left… until next year. 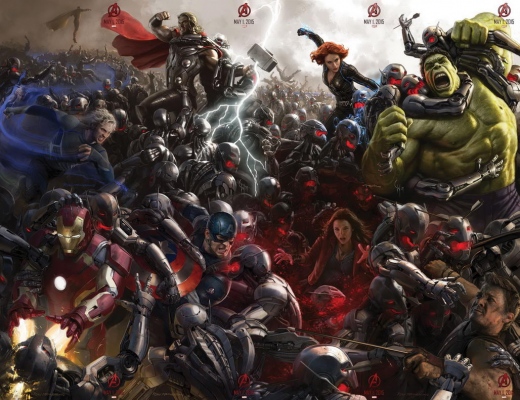