Transformers: Robots in Disguise place years after “Transformers Prime,” when Bumblebee is summoned to save Earth from a new faction of Decepticons.

Earlier today Hasbro revealed the first footage for their upcoming 2015 Transformers animated series, Transformers: Robots in Disguise. Check out the footage and show description below:

Transformers: Robots in Disguise place years after “Transformers Prime,” when Bumblebee is summoned to save Earth from a new faction of Decepticons and assembles a rogue team of young Autobots that includes a rebel bad boy bot, an elite guard cadet, a bombastic Dinobot and hyperactive Mini-Con to capture their new enemies. Each new bot is a fully capable action hero but inexperienced in working together in a team, forcing Bumblebee to become both squad leader and coach, Hasbro said. The show will feature voice actors such as Darren Criss, Constance Zimmer, Mitchell Whitfield and Ted McGinley. Also from the article: “[the] creative team includes kids programming vets Jeff Kline (“Transformers Prime”) as executive producer; producer Adam Beechen (“The Adventures of Chuck and Friends”); and Steven Melching, a writer on “Star Wars: The Clone Wars,” who will serve as the show’s story editor. – Variety 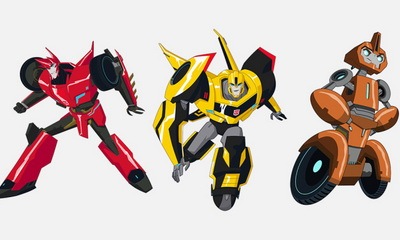