the highlight of the panel was when a gaggle of Goosebumps monsters invaded the stage and dragged Jack Black off, presumably to a violent death.

One of the biggest surprises of today’s Sony Panel was that there was absolutely no mention of Neil Blomkamp’s Chappie. Instead, the studio chose to focus entirely on two films, Pixels and Goosebumps.

Moderated by Drew McWeeney of HitFix

The panel started off with Pixels, Chris Columbus sent a video intro from the set of of the movie. Jokingly Says “The visual FX are going to be groundbreaking in the way they bring 8 pixel characters to life.” He showed some footage, pre-CGI of Josh Gad looking at a tennis ball and calling it Centipede. The ball on a stick then chases him around. No real footage, but at least the animated logo for the film.

Fans at SDCC can win a chance to be in the movie by scoring high scores at the Pixels arcade just off property of the convention.

and that’s it for Pixels.

Next up it was time for Goosebumps. Sadly, RL Stine only appeared via recording from the film’s set, but he said in his message “Everyone is focused on which monsters will be used in the film, but the focus is actually going to be on him.” He then went on to say that Jack Black was his first choice to play him and … poof… Black came onto the stage to huge applause.

After Black introduced the director, Rob Letterman, they screened an early teaser. Any mosnters shown were all unfinished.

Here’s a description of the footage:
It opens on one of the male leads, arriving at a new home with his mom, Amy Ryan. His next door Neighbor, Hannah, pop into introduce herself. Next, we see film’s protagonist, alongside with his geeky friend, talking about Hannah. They hear her scream and then pick the lock to get into her house. Upon entering, they are spooked by a Cookoo clock and then they notice a shelf full of RL Stine manuscripts followed by Jack Black, as Stine, standing in the shadows. Black’s character then tells the boys that all the monsters he’s created are trapped inside his books and something bad will happen if they escape.

In the next scene, we see Stine, Zach, and Hannah driving when they are attacked by a giant Praying mantis. We also get to see a werewolf, abominable snowman, garden gnomes, and Slappy the ventriloquist dummy. There is also a scene showing kids sucking monsters back into the books.

After the footage, black pulled out the slappy dummy and showed off his own ventriloquism skills. After a short argument between black and slappy, the dummy brings several other monsters onto the stage including: The Graveyard Ghouls, Murder the Clown, The Witch Doctor, Professor Shock, A vampire, The Creep, The bugeye aliens, The Pumpkin Heads, Exocutioner The Clown, and the Scarecrow. All the monsters then drag Black off stage. 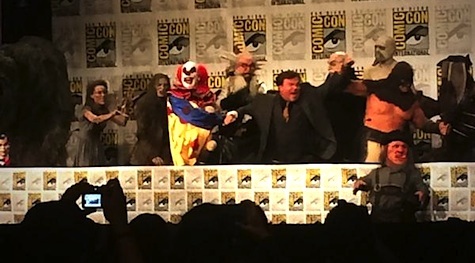 And that was that. No bond, No Spider-Man or Sinister Six, No Chappie, but still an entertaining time for all.