Paramount kicked off Hall H today with one of the biggest surprised guest, Christopher Nolan himself.

Paramount kicked off Hall H today with one of the biggest surprised guest, Christopher Nolan himself. Nolan made his first SDCC appearance to talk Interstellar and to show off the very first trailer.

Joining him on stage was actor Matthew McConaughey who plays Cooper, a pilot engineer who is widowed with two children. The premise of “Interstellar” revolves around a finite world with no “new, bright ideas.” But opportunity comes knocking and he’s been giving the opportunity to explore space(?) and do more.

The trailer opens with a teaser revealing archived footage of JFK and his famous space and exploration speech. We are then greeted with a voice over by Michael Caine, reciting Dylan Thomas’ “Do not go gentle into that good night.” We get to learn more about Cooper and how much of a good father he appears to be, and the difficulties he is having knowing that he must abandon his kids for his mission to save a “dying” world. The visuals amazing and similar to “Inception,” asks more questions than it answers.

The film seems ambitious, and according to Nolan, may have been inspired by Stanley Kubrick’s “2001” and his experience as as child growing up during the space race in which being “an astronaut was the highest ambition of any child.” 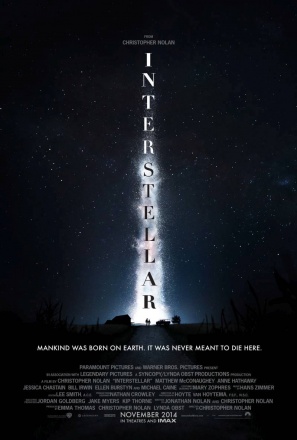