There may be something supernatural doings in Daniel Radcliffe’s new film, Horns, but the super natural thrills is a long way from his day at Hogwarts. Today, a special Comic Con poster was released for the film which also stars Juno temple, Joe Anderson, Kelli Garner, Max Minghella, and James Remar.

“Horns,” a supernatural thriller driven by fantasy, mystery and romance, follows Ig Perrish (Radcliffe), the number one suspect for the violent rape and murder of his girlfriend, Merrin (Temple). Hungover from a night of hard drinking, Ig awakens one morning to find horns starting to grow from his own head and soon realizes their power drives people to confess their sins and give in to their most selfish and unspeakable impulses – an effective tool in his quest to discover the true circumstances of his late girlfriend’s tragedy and for exacting revenge on her killer. 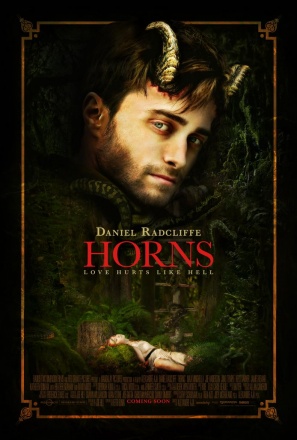