It’s a thrill ride set after the end of the world… and it looks awesome!

After almost thirty years since the last installment, Mad Max Fury Road is getting ready to hit theaters and the movie was out in full force at the Warner Bros Panel in Hall H about an hour ago.

The panel kicked off with a short video from Charlize Theron, praising director, George Miller and then the words “Blood Fire Oil” and “Comic-Con Belongs To The Mad.” appearing on the screen. This was followed by a video retrospective of the entire Mad Max series.

Talking about coming back to the franchise he created so long ago, director Miller said that 75% of his job was done in the casting of Tom Hardy and Charlize Theron. He said he was waiting for someone like Hardy to come along and fill the role and that Theron has the qualities that are an exact fit for the character of Imperator Furiosa.

On the set up for the script, Miller said that they opted to do it as story boards instead of a traditional screenplay. By the time they finished, they had 7500 storyboard, but not too much dialogue. The goal is to tell the story mostly in images and he feels they’ve accomplished that.

On the popularity of the Mad Max franchise in the US, Miller said that he was surprised it was so well received and would have never imagined back then that he’d be making a new Mad Max film 30 years later.

Here are a couple of highlights from the Audience Q&A
When asked how the film fits in with the original trilogy in regards to the tone, Miller told fans: “Closer to Mad Max 2, simply because it happens over a short period of time. A few period of days, and there’s an extended chase”

On how far along they are with the movie:
Miller said they still had some ADR work to do with Tom Hardy and then they had to work on the music and score with JUNKIE XL. After that,t hey just need to mix it and tidy it up a bit.

On other characters in the film that he had special feelings for:
Miller told fans that the man with the gas mask, Imorden Joe is actually played by the same actor who played Toecutter in Mad Max 2. That character died at the end of that movie, but Miller figured that people won’t know because he’s wearing a mask

Footage description:
In the footage that they showed we see that Mad Max is captured by the Imorden Joe character, but he manages to escape with Nicholas Hoult. After that they team up with Theron’s Furiosa. We also see a massive demolition derby, tons of explosions, dust storms, cars being sucked into tornadoes, tornadoes bursting in to fire…. it’s a thrill ride set after the end of the world… and it looks awesome!
***UPDATE- We now have the footage for you to watch HERE 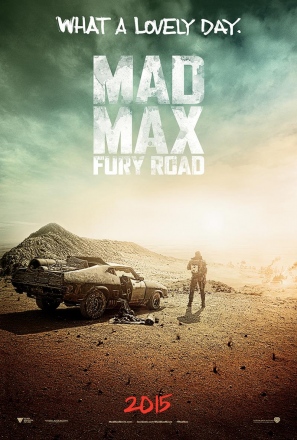