Nightfall stars Mike Colter as Jameson Locke, a super soldier and a rising star in the Spartan army. that said, he’s troubled by the military industrial complex he inhabits. The film is being used to introduce the Locke character as he has an integral role in the upcoming Halo 5: Guardians.

The series was directed by Sergio Mimica-Gezzan, written by “Prison Break” creator Paul Scheuring, and is being produced by Ridley Scott and David Zucker. 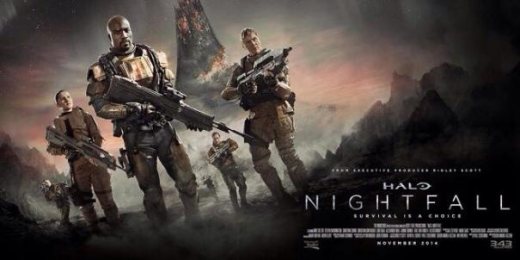 Official Synopsis:
Halo: Nightfall introduces a pivotal new character, Jameson Locke, a legendary manhunter and agent with the Office of Naval Intelligence (ONI), Earth’s most powerful and secretive military branch. When he and his team are caught in a horrific biological attack, they unravel a plot that draws them to an ancient, hellish artifact, where they will be forced to fight for their survival, question everything, and ultimately choose between their loyalties and their lives.

Taking place between the events of Halo 4 and Halo 5: Guardians, Halo: Nightfall is Locke’s origin story which will lend insight and understanding into the character he becomes in Halo 5: Guardians.