This time out she’ll be returning to The CW as a cop in love with a monster in Beauty and the Beast and as a sexy android in Space Milkshake.

When we last saw Kristin Kreuk, she was sucking up the role of Chun-Li in the Street Fighter movie something hard. Now she’s not only back, but she’s back at the network that made her a household name, The CW. This fall she’ll be starring in one of the five new series picked up by the network that also includes the new Green Arrow series “Arrow.” She’ll be playing the beautiful cop in the newest version of “Beauty and The Beast.” The last time B&B was a TV series, it launched Linda Hamilton into stardom, so this might just be exactly what she needs.

But wait, there’s more! Personally, I don’t really care about Beauty and the Beast… However, she’s also got what looks to be a fairly epic film on the way. (Epicly good or bad is still up for debate). That film is called “Space Milkshake” and in it, she places a sexy android living on a giant space garbage truck.

The film looks super campy and could be a cult classic in the making. Lord knows, she’s actually got a great cast of genre actors along for the ride: Amanda Tapping from Stargate SG-1 and Sanctuary, Robin Dunne from Sanctuary and Billy Boyd from Lord of The Rings.

Here’s the film’s official synopsis and trailer:
Jimmy, a low rated computer technician, has been assigned to an orbital sanitation station, which is a fancy word for a space garbage truck.

When Jimmy discovers a mysterious device, a Time Cube, things go from weird to weirder. In a time travel jump gone wrong, an evil scientist named Gary takes over the body of a rubber duck and begins to mutate and wreak havoc on the entire ship. As Gary gains control of the ship and plans to use it in his plot to alter history as we know it, the fate of the crew and the entire Universe ultimately rests in Jimmy’s hands. 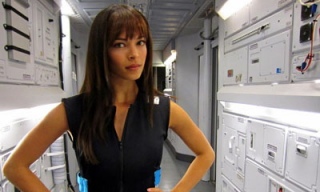