Denny’s is just one of the brands partnering up with the film including… Solo Cups.

The Marketing is ramping up for Disney/ Lucasfilm’s Solo: A Star Wars Story, and the production is starting to unveil their promotional partners, like Denny’s. The all night breakfast diner isn’t the only company set to join up to promote the film. Solo will also be partnering with Esurance, General Mills, Nissan, Symantec Corp and — in a natural-born pairing — Solo cups. While we don’tknow the dhape that any of these promotions will take, we do know that there will be some sort of event (and probably some intergalactic menu items (blue milkshake anyone?)). Today, the chain released this new banner for the film, with a fresh look at the movie’s main characters. Given that Solo: A Star Wars Story hits theaters on May 25, I’m surprised that we haven’t seen a lot more promotional stuff hitting the shelves yet. 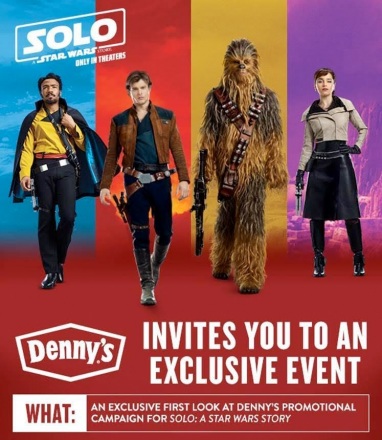