Soon, You Can Catch Fire In Your Very Own THE HUNGER GAMES: CATCHING FIRE High Fashion

Push aside all the action, adventure, romance, and intrigue in the Hunger Games Saga and what do you have? A bunch of people in fancy clothes looking fancy. Well, now Lionsgate and NET-A-PORTER are teaming up to create a new collection of clothing that will be designed by Trish Summerville, the film’s Costume Designer. Check out all the details below. 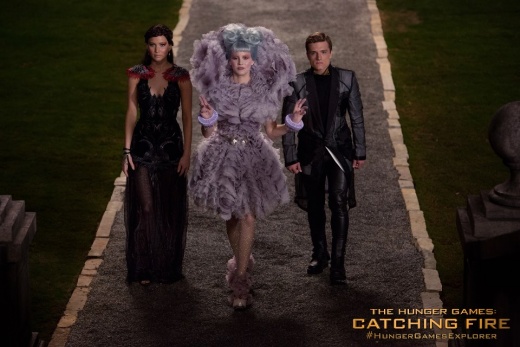 The luxury clothing line “Capitol Couture by Trish Summerville” consists of 16 ready-to-wear pieces as well as jewelry and leather goods inspired by “The Hunger Games: Catching Fire” and designed by Trish Summerville, the film’s Costume Designer. The collection will be available exclusively on NET-A-PORTER this fall in time for the film’s worldwide release on November 22, 2013.

“I am extremely proud of the designs that we created for ‘The Hunger Games: Catching Fire’ and there’s no partner more appropriate for ‘Capitol Couture’ than the world’s most cutting-edge luxury retailer,” Summerville said. “I can’t wait to share it with the public through this exclusive partnership with Lionsgate and NET-A-PORTER.”

Holli Rogers, Fashion Director, NET-A-PORTER.COM, stated, “When we were approached by Lionsgate to offer the collection by Trish Summerville to our customers exclusively, we jumped at the chance. Our customers take their style cues from myriad sources, from the latest runway shows and street trends to TV and film. Fashion plays an important role in ‘The Hunger Games’ series and is especially prevalent in ‘Catching Fire’, and fans of the franchise will see the film reference in the collection. This is also brilliant fashion in its own right, and we’re delighted to provide our customers with the chance to purchase limited-edition pieces designed by one of the most original costume designers in the industry today.”

Tim Palen, Lionsgate’s Chief Marketing Officer, said, “In the world of ‘The Hunger Games,’ one of the ways the Capitol defines itself is through fashion. When we launched Capitol Couture online (capitolcouture.pn), it took off and quickly became an out-of-world experience for both fans of the franchise and those obsessed with the future of fashion. Trish Summerville’s Capitol Couture collection for NET-A-PORTER is a brilliant, elegant and chic extension of this effort.”

Summerville will be honored this evening as Costume Designer of the Year on behalf of her work for “The Hunger Games: Catching Fire” at the 10th Annual Style Awards, which kicks off Mercedes-Benz Fashion Week in New York. Summerville has also won the Costumer Designer’s Guild Award for her work on director David Fincher’s 2011 film “The Girl with the Dragon Tattoo.” She has designed award-winning costumes in music videos from top recording artists including Justin Timberlake, Pink, Janet Jackson and The Black Eyed Peas. Her work can also be seen on Showtime’s “Ray Donovan” as well as in commercial campaigns for Apple, Nike, Heineken, Tanqueray, Volkswagen, Diet Coke and Chevrolet.

“The Hunger Games: Catching Fire” begins as Katniss Everdeen (Jennifer Lawrence) has returned home safe after winning the 74th Annual Hunger Games along with fellow tribute Peeta Mellark (Josh Hutcherson). Winning means that they must turn around and leave their family and close friends, embarking on a “Victor’s Tour” of the districts. Along the way Katniss senses that a rebellion is simmering, but the Capitol is still very much in control as President Snow prepares the 75th Annual Hunger Games (The Quarter Quell) – a competition that could change Panem forever. The novel on which the film is based is the second in a trilogy written by Suzanne Collins that has over 50 million copies in print in the U.S. alone.

The first installment of “The Hunger Games” was the 14th highest-grossing North American release of all time on its way to grossing nearly $700 million at the worldwide box office.