If you haven’t heard about TNT’s new show “Falling Skies” you soon will. 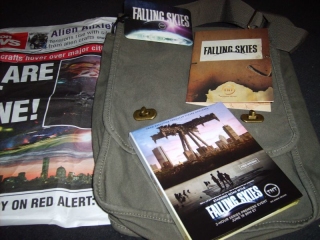 If you haven’t heard about TNT’s new show “Falling Skies” you soon will, either with this post or when the show eventually airs in June and it’s the most talked about show at work/school and you’re treated like a social outcast for not watching it.

Thanks to the marketing folks by TNT, an interesting package arrived yesterday marked “Falling Skies.” After carefully tearing it open half expecting an alien to jump out at me, I was pleasantly surprised by what was inside – a “Falling Skies” satchel and DVD screener goodies.

First, there was an official letter from TNT reminding me not to reveal any spoilers or they’d come and hunt me down (not really). A small booklet with show terminology and character bios for 18 characters that’ll appear on the show. In addition, there was also a newspaper from “Boston News” proclaiming how “We’re not alone!” that was used to wrap a two-disc DVD case that housed screeners of the two-hour pilot (set to air June 19th) and a second episode titled “Prisoner of War” (June 26). Although I haven’t had the chance to watch them yet, I did skim through the pilot briefly and I can’t wait to watch them!

From executive producer Steven Spielberg, “Falling Skies” is set to debut on June 19th at 9PM ET/PT. If you can’t wait that long, you can always get a sneak peak of TNT’s new alien sci-fi series here.

Here’s the official synopsis:
FALLING SKIES is an exciting new series from DreamWorks Television and executive producer Steven Spielberg. Noah Wyle (ER, TNT’s The Librarian movies) stars as a former college professor who becomes the leader of a group of soldiers and civilians struggling against an occupying alien force. Moon Bloodgood (Terminator Salvation) co-stars as Anne Glass, a therapist who works with the surviving children to help them cope with the traumatic situation. The series also stars Drew Roy (Lincoln Heights) as Hal and Maxim Knight (Brothers & Sisters) as Matt, Tom’s two sons; and Seychelle Gabriel (Weeds) as Lourdes, an orphaned teenager who helps run the group’s commissary. Will Patton (Armageddon, TNT’s Into the West) will play a recurring role as a fierce resistance fighter.