It is refreshing to see that Hamill doesn’t just want more of the same CGI madness that helped ruin the last three films.

We’ve got two things to talk about here today. The first is a quickie. Producer, Bryan Burke gave an update on when they are expecting to start filming.

“We’re progressing on a schedule to hopefully begin next year, or the beginning of next year, and the location is still kind of floating around in the air all depending on script and a whole bunch of other issues. As I just said, everything is kind of a free-flowing thing, and when we feel like the story level on this script and everything is really coming together and schedules are all working and pieces line up, we prowl ahead, and Star Wars will be no different.”

Next up, Mark Hamill did a lot of talking about the new films during a Star Wars Day screening of Return of The Jedi with Entertainment Weekly.

Here’s what he told Kathleen Kennedy about the new films special effects:
“There’s nothing wrong with CGI, but I think you have to have a balance because the camera perceives the width and the depth and the weight of a miniature or a model.” He just said he isn’t a fan of the one guy surrounded by greenscreen look and told Kennedy that he’d hate for these new movies to “look like Roger Rabbit.”

Here are his remarks on how age will be addressed in the new films:
“I want it to be age appropriate, so heavy on the Jedi mind tricks and lighten up on the lightsaber duels. Let the kids do the heavily lifting!” 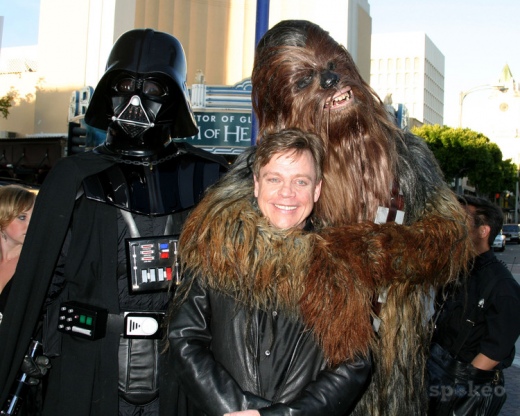